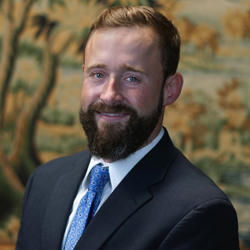 Steven Chumbler joined the firm in January 2020 after practicing law in Alabama for 5 years. He was admitted to the State Bar of Georgia shortly thereafter. Steven’s most recent position prior to joining the firm had been in the Montgomery County District Attorney’s office. Steven is a 2011 graduate of the University of Alabama with degrees in History and Political Science. In 2014, he graduated from the Faulkner School of Law and was admitted to practice law in the State of Alabama.

Steven and his wife, Lauren live in Rome, Georgia where he is a member of the 2007 class of the Darlington School. Steven is a lifelong fan of the University of Alabama and the Green Bay Packers.